Hello everyone! Can you believe it’s already December? This year has flown by. I’ve been busy making some Christmas gifts which I won’t be able to share until after Christmas, but I do have November’s Minis and More finished.

It’s the Scrappy Patchwork Pillow Tutoria by Sherri of A Quilting Life.

This is her original design.

This is what I did with it.

It’s a 16″ pillow top with an envelope back. The fabrics are all by Holly Taylor. The blues are from this year’s Town Square and the others are from past lines that I had in my stash. 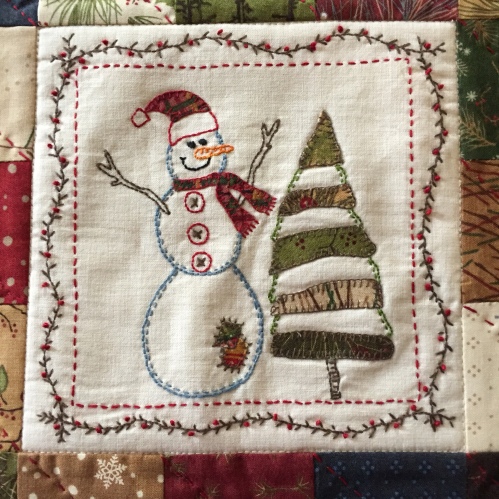 I decided to do some embroidery for the center instead of the 16 patch block and the inner border, which is a 6″ block. The embroidery is two designs by Jacquelynne Steves from her new Art of Home Club and Everything Patterns Ebook. The snowman and tree are one pattern and the garland frame is another pattern. I reduced the garland pattern by 75% and the snowman by 57%. I like how adding a little applique to embroidery gives it just a little more dimension. I used a hand buttonhole stitch on the applique using one strand of floss. I also added french knots to the garland. 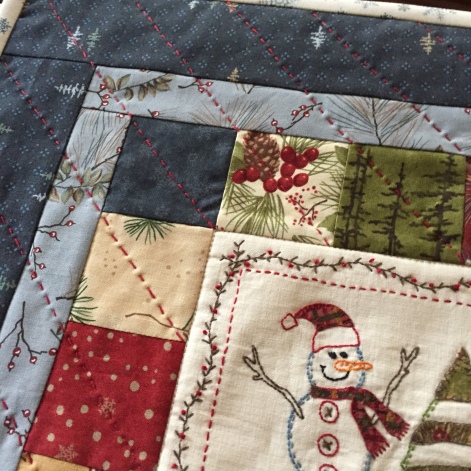 And because I was doing the handwork, I decided to quilt it using two strands of floss. I used multiple flosses: the red and brown are Aurifloss by Aurifil, the blue and green are DMC and the orange is a Valdani. This is the first time I’ve used the Aurifil and it is very nice to work with. 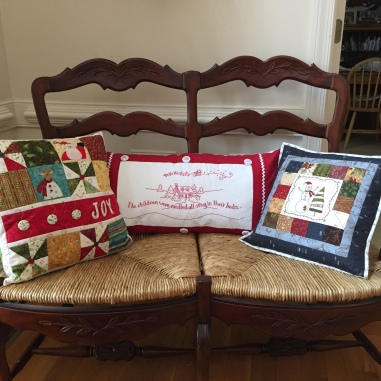 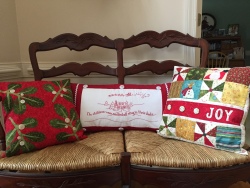 The pillow will probably reside on my foyer bench with some of the others that I have done in the past, just need to decide which ones to use. If it doesn’t go there, we will enjoy it in the family room. The other nice thing about this pillow is that I purposely used winter themed fabric instead of Christmas so it can stay out all winter.

Be sure to stop by and see what everyone else did at Sherri’s and Michele’s sites. Thanks for stopping by.

3 Responses to November Minis and More